Which States Pay The Most Federal Taxes?

What state pays the most in taxes? Whether you look at total federal taxes paid by state residents or tax revenue by state per capita, there are big differences in federal tax burdens by state. Here's how to minimize what you pay.
By Richard Barrington
Last updated: October 7, 2021
Our articles, research studies, tools, and reviews maintain strict editorial integrity; however, we may be compensated when you click on or are approved for offers from our partners.

Looking at the amount of federal income taxes paid by people around the country can serve as a reminder that you may be able to do something about your own tax burden.

Tax season reminds everyone how much they pay to support the federal budget.

But are you living in a part of the country where the tax burden falls particularly heavily?

A state-by-state examination of federal income taxes paid by individuals in each state found that, while people everywhere contribute to the federal government, residents of some states clearly pay more than others.

What State Pays the Most in Taxes?

If you’re wondering who pays the most federal taxes, it depends on how you look at it. These four perspectives highlight the differences from state to state:

In total, California contributes the most individual taxes to the federal budget.

As of the most recent tax year for which figures were available (2017), Californians paid over $234 billion in federal income taxes. That’s about 15% of the national total, and nearly 95 times as much as paid by residents of Vermont.

Most per adult resident – Connecticut – $10,364 individually

Connecticut pays the most per adult resident of any state, at $10,364.

Residents of Washington, D.C. also pay the highest percentage of their income in federal taxes, at an average of 17.40%. That’s a rate more than 60% higher than the average 10.67% in federal taxes paid by residents of Mississippi.

Over the five years since this study was first conducted, Florida saw the biggest increase in federal tax burden paid per adult with a rise of 41.21%.

In contrast, the average tax burden paid by people in North Dakota shrank by 15.32% over that same period.

California has the largest population of any state, and those residents earn a relatively high average income. When you combine those two factors, it’s no surprise that California residents pay more federal taxes than those of any other state.

Vermont pays the least. Total federal income taxes in Vermont are about $2.5 billion. That’s due to the combination of having the second-smallest adult population of any state and a below-average per capita income.

Here are the top 10 states in terms of total federal income taxes paid: 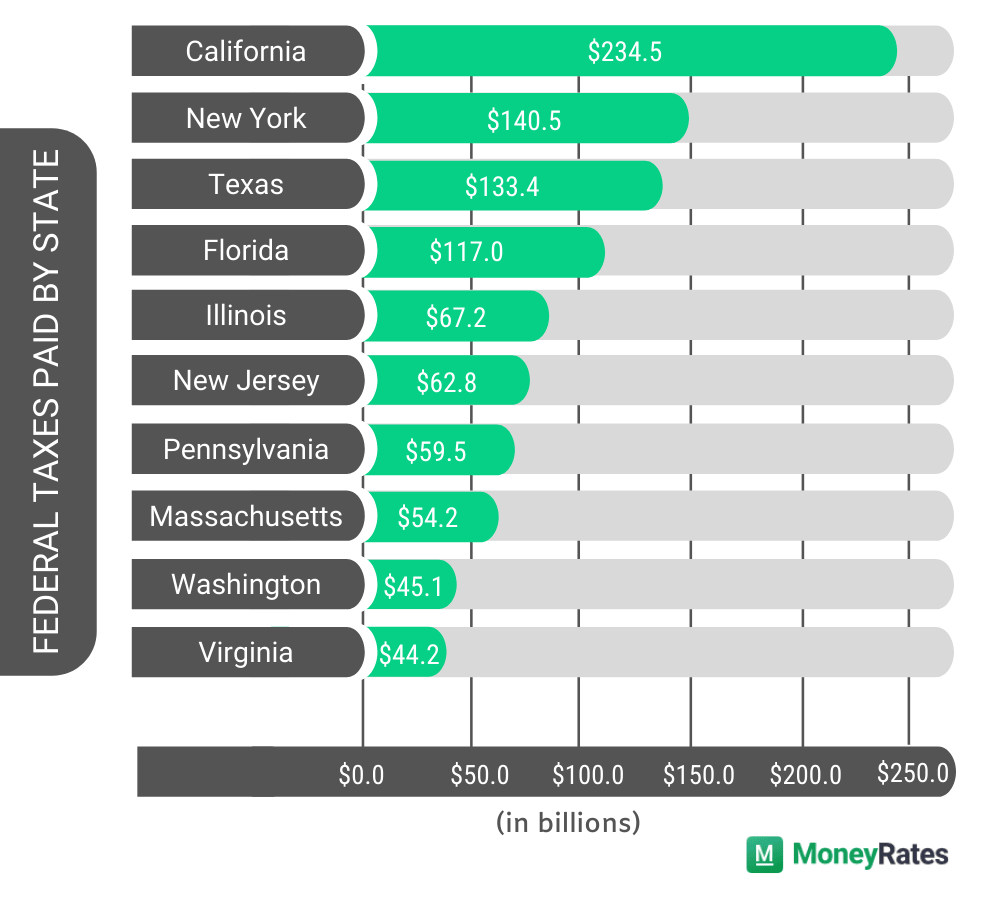 While the list of states paying the most total federal income taxes is dominated by high-population states, the picture changes somewhat when you look at it in terms of the average amount paid per person.

Tax Burden as a Percent of Income

In general, the more income you make, the more taxes you’ll pay; but other things affect your tax burden as well. How you make your income and what kind of deductions you claim also have an impact.

Naturally, the District of Columbia topped the list; but Mississippi was the only state where adult residents paid an average of less than 11% of income in federal taxes. The average percentage federal tax burden in Mississippi is 10.67%.

Looking at federal taxes paid as a percentage of income yields several of the same names that appeared on the list of taxes paid per capita, but there are also some differences:

MoneyRates.com first conducted this study of what individuals in different states pay in federal taxes five years ago. People in most states are paying more now than they were then, but there are a couple of exceptions.

On average, people in Florida have seen the biggest increase in their federal income tax bills. The average federal tax paid per adult in the state of Florida has risen by 41.21% in just five years.

Average personal income tax burdens rose in 48 of the 50 states plus the District of Columbia over the last five years. The lone exceptions were Wyoming and North Dakota. Notably, these are two of only three states to also see a decline in average income per adult over that same five years.

Here are the states that have seen the largest percentage increases in average tax burden per person in the past five years: 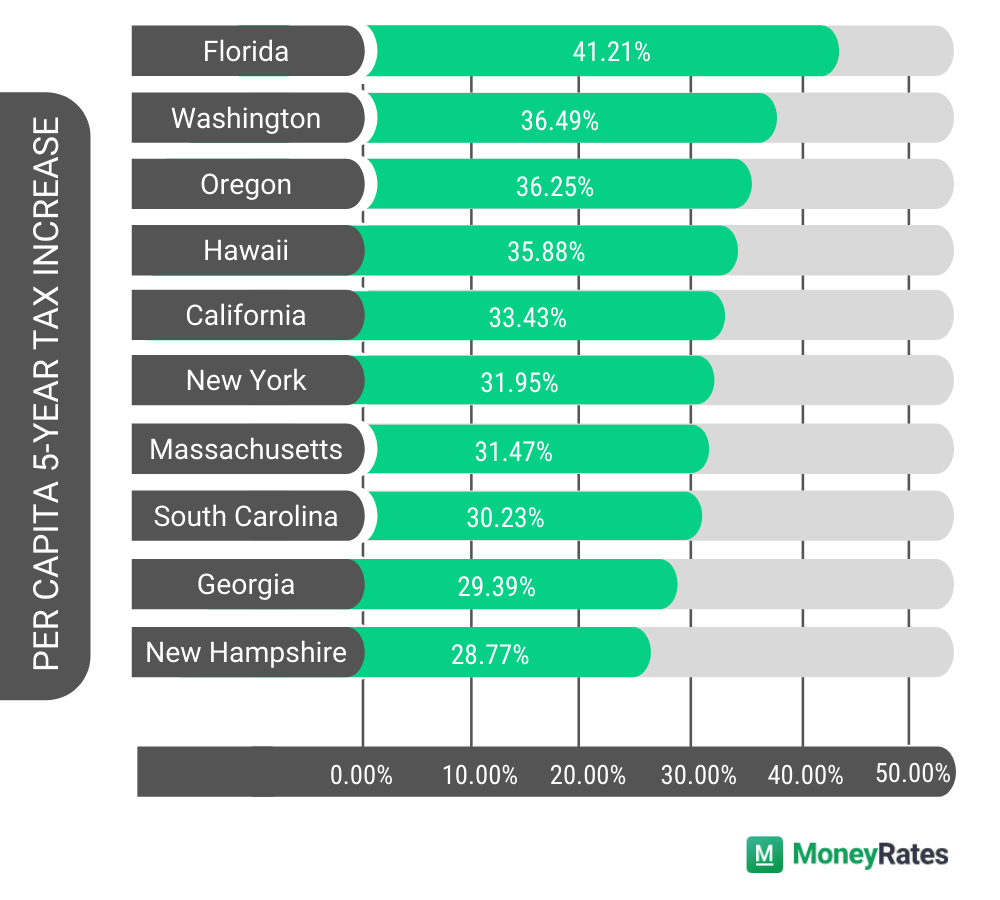 Changes Expected in Next Year’s Study

Because it takes a while for the Internal Revenue Service to finish collecting taxes, reviewing returns and compiling data, information based on tax returns is generally a couple years old. That means there might be an especially big change in tax burdens in next year’s version of this study.

The Tax Reform Act was passed in late 2017, which means it first took effect for the 2018 tax year. We expect data for that year to be available in time for next year’s study.

While changes to the tax brackets made by that law will apply uniformly to people across the country, one change has impacted people in some states much more than others.

Capping the state and local tax (SALT) deduction at $10,000 will be especially hard on taxpayers in states where:

While residents of some states will mostly benefit from the general lowering of tax rates that was part of the Tax Reform Act, the capping of the SALT deduction has likely caused others to owe more taxes.

States with the characteristics listed above are likely to climb higher on the lists for all categories of this study: total taxes paid, per capita taxes paid, percentage tax burden and increase over time.

Data on taxes and income levels came from the IRS while figures for the adult population of each state and the District of Columbia came from the U.S. Census Bureau.

This study focused on individual income taxes only. The per capita figures were calculated by dividing the total taxes paid by individuals in each state by the number of adult residents of that state.

>> Tax Preparation Fees: What It Costs to Get Your Taxes Done

This look at the amount of federal income taxes paid by the people of each state can serve as a reminder that there may still be time to do something about your own tax burden.

Whether you live in a state with a relatively heavy or light tax burden, a little planning might help lower the amount you pay.

Opening an IRA account or contributing to an existing one by April 15 could make that burden a little lighter this tax season.

This type of tax-advantaged account allows you to win twice – once by reducing this year’s tax burden and a second time by adding to your retirement nest egg.

While contributions to a 401(k) plan or a traditional IRA are both generally deductible, a crucial difference is in when those contributions must be made:

However, contributions to a traditional IRA can be made up until the April 15 filing deadline and still be deductible in the prior tax year.

So, if you make a contribution to a traditional IRA before April 15, 2020, you should still be able to deduct it on your 2019 tax return.

The reason is that taxes are paid on a traditional IRA when you withdraw the money from it in retirement, while retirement distributions from Roth IRAs are not taxable.

If you turned 50 years old before the end of 2019, you may be able to make an extra tax-deductible contribution to your traditional IRA. This is called a catch-up contribution and, as the name suggests, the purpose is to help older workers get caught up on their retirement savings.

Home » research-center » Which States Pay The Most Federal Taxes?